16 cool and crazy alarm clocks to wake you up

The first recorded use of an alarm clock was by the Greek philosopher Plato. He had a water clock with a signal that sounded like the whistle of a water organ. He used it to signal the beginning of his lectures, which started at dawn. During the middle ages, some clocks in church towers were set up to chime at a certain time each day. In small towns, townspeople were awakened for the day by the ringing of the town bell. The first user-settable mechanical alarm clocks were invented and used as early as the 15th century.

As technology progressed, people became more and more dependent on their alarm clocks. During the Second World War clock making factories in the US ceased production, as the factories converted to war work. It was, however, one of the first consumer goods to resume being manufactured for civilian use. By 1944, a critical shortage in alarm clocks caused workers to be late for, or completely miss, their scheduled shifts in jobs that were critical to the war effort.

Today, as with many things, alarm clocks have largely been replaced by smartphones. It is much easier to just set the alarm on your phone than to buy another gadget to place on your bedside table.

However, as research has shown, it might not be such a great idea to keep your phone next to your bed. The blue glare from the screen keeps your brain awake longer in the evening, when it should be shutting down to sleep. Picking up your phone first thing in the morning, to switch off your alarm, usually results in a quick check of your Facebook or Instagram or emails. This has been shown to be very hurtful to your productivity during the day.

One way to battle this is to invest in a physical alarm clock, separate from your phone. There are many cool and crazy alarm clocks on the market today. You should be able to easily find one to suit your needs.

As with your phone alarm, most clocks are relatively easy to snooze. Today we picked out some crazy clocks for heavy sleepers, that are guaranteed to get you out of bed. 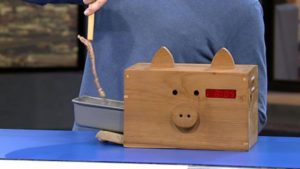 Who doesn’t love the smell of bacon cooking? The creators of this clock certainly did. This clock has been featured on sites such as Wired and Ubergizmo, and was originally featured on an episode of ABC Network’s Shark Tank. Inventor Matty Sallin rerouted the wires on a cheap alarm clock to power a set of halogen bulbs instead of normal lights. When the alarm is triggered the light bulbs heat up and starts frying the bacon. This awakens your olfactory senses.

To set up this cute pig shaped clock, just stick a piece of pre-cooked bacon in the tray before you go to sleep. The heavenly smell of bacon will ensure that you wake up in a great mood. 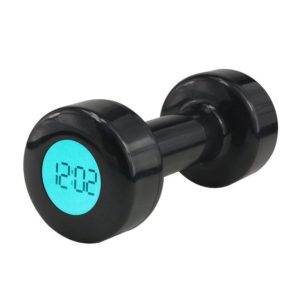 If you’re trying to get in shape as well as get into an earlier morning routine, the shape up clock is the alarm clock for you. This dumbbell-style clock was designed by Yuk Wang, and it features a LED display on the one end. It has a digital clock that allows you to set the alarm easily. When it does go off you have to do 30 bicep curls before the annoying buzzing sound will quiet down.

The alarm clock seems to only come in a 1kg weight, so it might not be much of a challenge if you are a regular gym member. However, it will still get your blood pumping and force you to get out of bed. 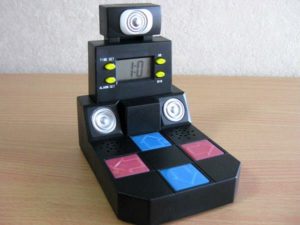 This crazy clock is perfect for people who like dancing games. Basically, you can set this alarm to ring at a certain time. When it goes off, you have to tap the display in a certain sequence (guided by the neon light blocks) until the noise quiets down. If you don’t follow the proper steps, the alarm will keep on ringing.

With an easy to read digital display, this clock will add a bit of quirky fun to your morning routine. If you struggle with dancing games, however, you might be tempted to chuck it out the window instead.

This clock by Equator is a pretty drastic gadget that’s guaranteed to wake up even the heaviest of sleepers. If it doesn’t, you better prepare some towels to clean up the pools of water on your floor. While this clock is unfortunately still a concept, the idea is that it will start spraying water if you don’t wake up at the correct time. Of course, in order for this clock to work you will have to aim it very specifically the night before. 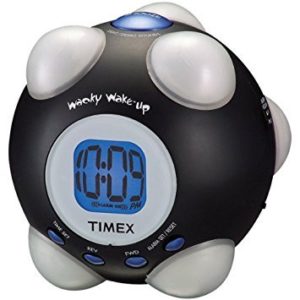 If the beeping of a regular alarm just isn’t doing it for you anymore, consider investing in this clock by Timex. This alarm clock wakes you up by yelling at you. It has seven different sayings in varying accents, and every time you press the snooze button you will hear a different voice. This colourful clock also has a vibrating action and an adjustable alarm volume. You can also easily set up a recurring alarm with this clock. While many of the clocks on this list are geared towards waking up your body and physically getting you out of bed, this clock is designed specifically to wake up your brain. To make it stop ringing you have to solve a difficult puzzle or IQ test based question. The IQ alarm clock wakes you up with a few brain teasers, that will have the old grey matter up and running in no time. And, of course, you have to answer correctly to ensure that the clock does stop. 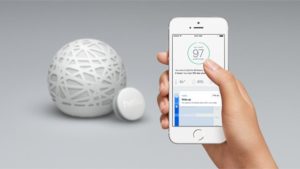 This aesthetically pleasing alarm clock might be the smartest invention on this list. It will not only wake you up, but it will also help you fall asleep and stay asleep during the night. The alarm plays relaxing ambient noises to help you fall asleep and drift easily off into dreamland. During the night, it monitors your sleeping habits with the help of a clip attached to your pillow. This info is sent to your smartphone and can help you understand and track your sleeping habits. Sense by Hello is a smart alarm, which means that it monitors your sleep cycles and wakes you up at the perfect moment. This means that you wake up feeling more refreshed and energized. 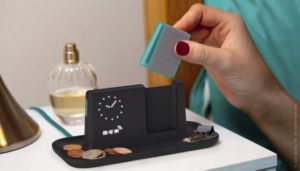 Most of the clocks on this list are relatively hardcore and invasive. The Chirp alarm veers from that path completely. This alarm clock is very selective in its wakening, as it gently vibrates the pillow of its victims until they are awake. Once you are awake, you just remove the clip from under your pillow and place it back into the alarm clock to shut it down. This is great for people with roommates who are picky sleepers. Plus, it is a great, stress-free way to wake up. 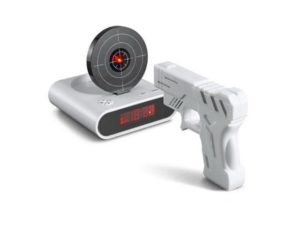 This clock might become a favourite of yours, if you’re into weapons and shooting games. It comes with a plastic gun and an alarm clock shaped like a target. It also features a fully customizable wake up message and music. When the alarm is triggered, it will play for about three minutes before the target is lit up on the clock. You have to hit the bull’s eye to get the clock to quiet down, but if you can manage to hit it five times it will reward you with an extra five minutes of sleep.

If you intend to start your day with a bang, this clock is definitely the one for you.

This sneaky little fellow was developed by engineering student Gauri Nanda. Having trouble herself to get up in the morning, she designed Clocky to shriek in the most annoying way. However, it doesn’t stop there. Once triggered, the all-terrain wheeled clock will bounce off your nightstand and go for a drive around your room. It is also rigged to make random turns and speed changes, making it even more difficult for you. Clocky is pretty athletic, as it can jump from heights as large as 3 feet. If you don’t feel like running after a clock first thing in the morning, you can just disable its wheels. 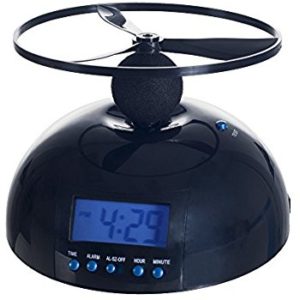 Like Clocky above, this alarm will also wake you up by having you scramble around your room. When the alarm is triggered, the flying alarm clock will launch its propeller off into your room. The blaring sound will continue until you catch the propeller and place it back into the keyhole on top of the alarm.

While this clock is actually still in the concept phase, it is one of my favourites on this list. The concept of the CoffeeTime alarm clock is that the effect of coffee isn’t just created by caffeine, but also by the smell and taste. The hourglass shaped CoffeeTime alarm clock comes with coffee pills of varying strength, that you need to place in the clock the night before. It gradually drips through the hour glass, waking you up with the sound of dripping and the smell of warm coffee.

If you are an exceptionally deep sleeper you might want to bring out the big guns and get yourself a Sonic Bomb. At a whopping 113 decibels this clock will have you waking up thinking that you’re in the middle of a very loud rock concert. However, prolonged exposure to this amount of noise might damage your eardrums. You should consider just making use of the Super Shaker bed vibrating unit. Together with the built-in flashing lights, this silent shaker is guaranteed to get you out of bed. 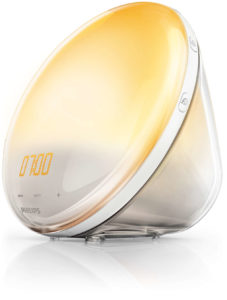 The Wake-up Light, like the Chirp Alarm, is a more calming way to wake up than many other alarms on this list. This nifty alarm clock gets you out of bed by simulating a coloured sunrise. The clock also plays a selection of gentle nature-inspired sounds. It closely resembles waking up naturally from the rising sun, and can make those dark and cold winter mornings much more pleasant. It also has a night-time dimming feature that can help you relax before bed. 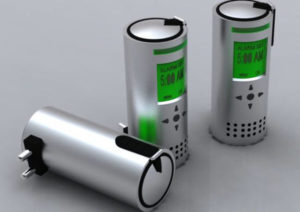 This might be the most cruel clock in this list. Once this conically shaped alarm clock starts ringing, you have to catch hold of it and twist. You have to keep going for at least 90 seconds, making at least two rotations every second. If you don’t manage two rotations, the clock won’t stop. And if you throw in the towel halfway through, you have to repeat the full run. As its name suggests, this clock has no snooze button. Once it starts ringing you’ll just have to wake up and start twisting for all you’re worth. 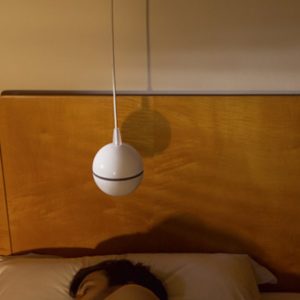 Sfera is a little less drastic than all the running and whirring and spraying clocks we’ve looked at, but it’s pretty efficient none the less. This alarm clock is mounted on your ceiling, and the elegant white sphere extends to just above your bed. Once it goes off it begins to glow gently. For every time you snooze it, it retracts a bit towards the ceiling. If you persist in pressing the snooze button, you might need a ladder to reach it after a while. I don’t know about you, but most people have found that clambering about on a ladder wakes them up in no time at all.

That’s it, folks. I hope you’ve found something that struck your fancy on this list. Do you use any crazy or inventive clocks to get out of bed? Let us know in the comments!