Sleeping and the Arts

Sleep is such a common thing. It is a daily occurrence – to most of us at least. The Prince and the Pauper must sleep. Male and female look to their beds for rest. Children and babies to bed must go. Nothing new, nothing strange. Yet, for as long as humans have been in existence, Sleep has fascinated us. The mystery of this strangely altered state. So wondrous (and fearsome) does this state appear, that we even find a god of sleep in Greek (Hypnos) and Roman (Somnus) Mythology. The beauty of the sleeping figure has inspired numerous poems and paintings through the ages. In them we find themes such as the longing for rest, peaceful sleep, regeneration, innocence and even erotic desire. And at once, the dread of the unknown – nightmares, insomnia, vulnerability.

In this article we will very briefly explore Sleep as depicted in art and literature. Fleetingly looking at both beauty and bliss in sleep, and fear and dread of the night that might bring sleeplessness and nightmares.

“On your eyelids crown the god of sleep,
Charming your blood with pleasing heaviness:
Making such difference ‘twixt wake and sleep,
As is the difference betwixt day and night,
The hour before the heavenly-harness’d team
Begins his golden progress in the east.”

The “pleasing heaviness” of sleep, albeit common to all men, is none the less unique to all men. You sleep alone. The experience of dreams and pleasure while sleeping, is yours alone.  (As is the fear and dread of sleep haunted with fierce dreams, or a night spent tossing and turning.) Precisely here lies the artists challenge – how to depict this very unique and individual state in such a way that it truly communicates the assumed experience. How to portray the sleep of the exhausted as opposed to the sleep of one in love? One way an artist might do this, is to force the reader or on-looker to ask. “What are the implications of sleep in the context of this particular setting?”

The beauty of deserved sleep

In both these paintings (above and below) by Vincent van Gogh (30 March 1853 – 29 July 1890) we see the reality of life, that he loved so much to paint. The portrayal of things “as they are”. We sense the deep and exhausted sleep of the labourers in the field, resting only for a while before the harvest must continue. The mother, fallen asleep by the fire with the baby in her arms, knowing sleep will be short, but oh! how precious those few moments of sleep. We can hear the echo of the bible words: “The sleep of a labourer is sweet…” Ecclesiastes 5:12a in these paintings – Vincent himself wanting to be a minister and spending much of his youth studying the bible and trying to serve to poor and weary. In the end, he served them best by his insightful and sensitive paintings. 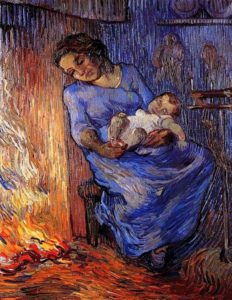 There are innumerable paintings, pictures and sculptures of women sleeping. From the Antique to the Modern, we find their beauty being praised in prose and poetry; even in children’s stories the prince cannot keep his eyes from the sleeping princess.

An influential artist, known for his depictions of women paints a radiant sleeping virgin. The Virgin is surrounded by six nude women. Even though all the women are sleeping, the painting still seems very animated, full of movement and bursting with life. Critics aren’t all of a same mind when it comes to the interpretation of Gustav Klimt’s (14 July 1862 – 6 February 1918) The Virgin (below). One of the theories suggest, even partly because of the felt movement in the painting, that the picture tells the story of the transition of girlhood to womanhood; with the six women portraying various stages of life. 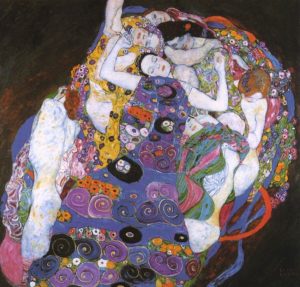 The healing powers and luxury of rest

Come Sleep, O Sleep, the certain knot of peace,
The baiting place of wit, the balm of woe,
The poor man’s wealth, the prisoner’s release,
The indifferent judge between the high and low;
With shield of proof shield me from out the press
Of those fierce darts Despair at me doth throw;
O make in me those civil wars to cease;
I will good tribute pay, if thou do so.
Take thou of me smooth pillows, sweetest bed,
A chamber deaf to noise, and blind to light;
A rosy garland, and a weary head;
And if these things, as being thine by right,
Move not thy heavy grace, thou shalt in me,
Livelier than elsewhere, Stella’s image see.

In this Sonnet Sir Philip Sydney personifies Sleep, trying to entice it to come and be his (Sydney’s) companion. He calls sleep a “knot of peace”, meaning it is a small flowerbed where peace can grow and flourish. A good night’s sleep is the “baiting place for wit”, that place where the mind can rest and be revitalised and restored. It heals wounds, and smooths out the difference between rich and poor, indeed it enriches the poor and brings freedom (if only temporary) to the prisoner.

Sydney offers Sleep a bedroom with smooth pillows, sound-proof and dark, he concedes that these things belong to Sleep already “by right”. But if Sleep would only come, it will be his shield against despair and stop the sorrows he carries around with him. He is even willing to pay Sleep, if only Sleep would come. And if all of these aren’t reason enough, if Sleep would grant sleep, it would see the most wonderful visions of the woman called Stella, the woman Sydney loves.

This Sonnet shows both the marvelous benefits of sleep, the power to heal both body and soul, and yet at the same time, it suggests what torment it holds when it eludes one, as it would appear to have eluded Sydney for a time. One should never forget what luxury it is to be able to sleep well.

The Luxury of Sleep

John Singer Sargent (12 January 1856 – 14 April 1925) captured the luxury of sleep so beautifully in his painting Repose (below). Everything in the picture speaks of luxury. The beautiful and clearly expensive furniture, the lush and voluminous silk dress, the beauty of the sleeping lady herself. But most of all it speaks of the luxury of being able to recline on a sofa, in the middle of the day, fold your hands and go to sleep. Not a luxury that all can afford. Not a luxury easily come by. Enjoy your sleep while you may! 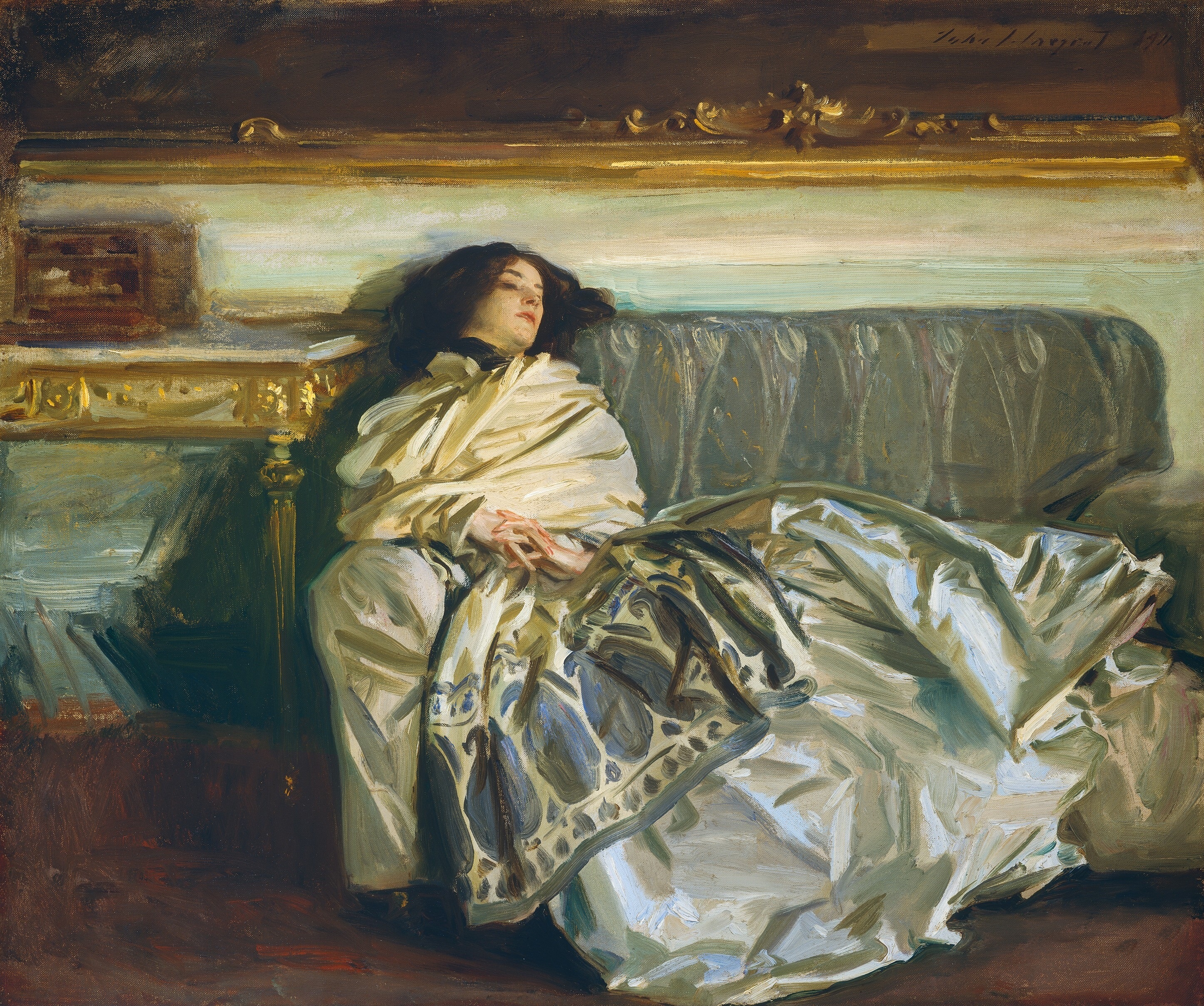 The dark side of Sleep

But not all artists portray sleep as something peaceful and desirable. Sleep can produce nightmares. It leaves one vulnerable and exposed, as we can see in Mars and Venus by Sandro Botticelli (c. 1445 – 17 May 1510). Here the mighty god of war is fast asleep and the play-thing of naughty Satyrs. Venus, fully clothed and wide awake, seems to be in control, surveying Mars in his state of weakness. Henry Rousseau (21 May 1844 – 2 September 1910) paints a sleeping gypsy in mortal danger. A lion hovering over her, might it devour the sleeping woman? The heaviness of sleep, described by Shakespeare’s Henry IV in one speech as something to be desired, is but a fragile state to Dalí, that, when broken, will let us fall back into the harshness of reality. As you can see, there are some very interesting artworks about sleep! 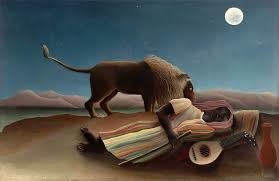 A flock of sheep that leisurely pass by

One after one; the sound of rain, and bees

Murmuring; the fall of rivers, winds and seas,

I’ve thought of all by turns, and still I lie

Must hear, first utter’d from my orchard trees,

And the first cuckoo’s melancholy cry.

Even thus last night, and two nights more I lay,

And could not win thee, Sleep! by any stealth:

So do not let me wear to-night away:

Without Thee what is all the morning’s wealth?

It seems that the meaning of this poem by Wordsworth is clear. For the third night in a row, he is lying in his bed and cannot sleep, no matter how he tries. And like all tired people, the new day holds no joy, but rather dread, as one cannot enjoy anything whilst being depraved of sleep.

This very same fate is lamented by Henry IV in Shakespeare’s play of the same name. Just hear how desperately he longs for sleep, speaking to it as if it were a person, just like Sydney and Wordsworth. But here King Henry also links sleep to death (“why rather, sleep, liest thou in smoky cribs”), another very common theme in art and literature. But not one that we will explore in this blog post.

“O sleep! O gentle sleep!
Nature’s soft nurse, how have I frighted thee,
That thou no more wilt weigh my eyelids down
And steep my senses in forgetfulness?
Why rather, sleep, liest thou in smoky cribs,
Upon uneasy pallets stretching thee,
And hush’d with buzzing night-flies to thy slumber,
Than in the perfum’d chambers of the great,
Under the canopies of costly state,
And lull’d with sound of sweetest melody?”
William Shakespeare, Henry IV, Part 2 (c. 1597), Act III, Scene 1, line 7-16.

Probably one of the most well-known paintings of a nightmare is that of Henry Fuseli (7 February 1741 – 17 April 1825) (below). A woman lies in deep sleep and on her breast sits an Incubus; from behind a curtain the glowing eyes of the horse, Nightmare, looks on. This painting is both frightening and eerie at once. Depicting dark and irrational forces that search one out in the night when you are vulnerable. 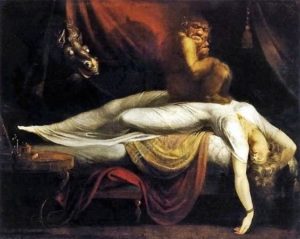 As we have seen in Wordsworth’s To Sleep, without sleep, there is little joy in daily activities. As was inferred by Sydney’s Sonnet 39, if one does not sleep, one’s mind cannot be rejuvenated and that ultimately leads to slow and slurred thought. A similar line of thought is followed in The Sleep of Reason produces Monsters (below) by Francisco de Goya (30 March 1746 – 16 April 1828). Though de Goya’s thoughts were more driven by social and political awareness, than by real sleeplessness. The idea, however is, that when one “sleeps” and turns a blind eye to reality, nightmares in their truest from arises and produces rotten societies.

Be it good or be it bad, sweet or frightening, artist will continue exploring various themes associated with sleep, forever fascinated with this oh so common occurrence, forever mystified by the individuality yet universality of sleep. The quest for truthful, powerful, depiction of various emotions even while sleeping will continue, as sleep remains a beautiful and poetic thing in and of itself. Equally it remains a beast, unwilling to be tamed.