Sleeping with your dog next to you is a comfortable and snuggly way to catch some shut-eye. Some people are avid believers in the habit of sleeping with a pet, some people see only the downside, and some people just don’t care either way, as long as their dog is happy.

Several studies on the pros and cons of sleeping with one’s pet have been done. The most recent in-depth study was done by the Mayo Clinic in the USA. They found that people actually sleep better with their dogs in the bedroom, but actually having the dogs under the covers with them made for less uninterrupted sleep. Dogs are fidgety sleepers and this could be a problem if you are a light sleeper.

Here are some further good reasons for keeping your dog near you when you sleep. 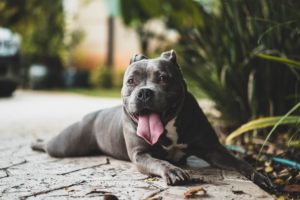 There are few things more comfortable than snuggling up with your pet, and even science shows that having a pet in your bed can have a great positive effect. Dogs especially are naturally happy and carefree animals. Interacting and talking with your dog is a great way to relieve stress, and talking it for a walk can help you work off some anxiety. Many people also find that just lying down with their dogs and petting them have a very calming effect. A dog’s regular breathing also acts as a kind of lullaby to lull you to sleep. Many people who struggle with insomnia have found that having their dog near them as they try to fall asleep helps immensely.

Another aspect of boosting your mental health by having a pet in your bed is physical contact. The presence of another live being in your bed has been shown to produce a feeling of security and psychological well-being. Feeling a dog or cat against your back or beneath your feet is very similar to cuddling with another human being. It stimulates a sense of calm and security that is very beneficial to mental health and a good night’s rest. It is also makes it easier to fall asleep again after waking up in the middle of the night.

If you are battling with depression, having a pet to look after can also keep you going. When you’re feeling down, it is often difficult to find the motivation to get out of bed in the morning. Having a pet that relies on you to let them out every morning helps you get moving, and also reminds you that you mean a lot to at least one being in this world. 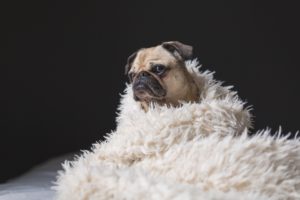 The human body’s normal body temperature is between 36.5 and 37.5 degrees Celsius (97.5-99.5 degrees Fahrenheit). However, during REM (rapid eye movement) sleep, your brain switches off the cells that regulate your body temperature. This means that your body becomes very susceptible to the temperature of your bedroom during your deep sleep. Many people, especially those whose body metabolism struggles to keep them warm, find themselves waking up shivering in the middle of the night.

Having a pet to snuggle up to is a nice way to get rid of this problem. Your dog’s normal body temperature is between 38.3 and 39.2 degrees Celsius (101 – 102.5 degrees Fahrenheit), making it an easy 2 to 3 degrees higher than your own. This means that your dog can serve as a living, breathing hot-water bottle to keep you warm during the night.

Not to mention that their furry coats makes them even toastier to snuggle with. Dogs are excellent at keeping themselves warm, using the different layers of their coats to alternatively reflect or entrap heat.

Just make sure that you dog doesn’t become too heated during the night. Remember that they cool down by panting, so if you notice that happening help your dog find a cooler place and some water to bring their body temperature down. 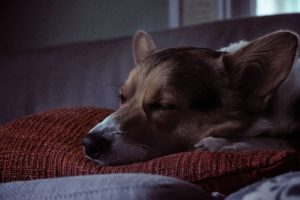 High blood pressure, or hypertension, is a fairly common problem with almost no obvious symptoms. However, it can considerably increase the risk of getting a stroke or heart attack.

In a recent research study, 60 participants of both sexes had their blood pressure taken. It was taken alternatively while stroking a dog, and talking to another human. Surprisingly, the test subjects’ blood pressure was shown to be higher while talking to the person, and a lot lower while petting the dog. Although this study draws from a rather small testing pool, it seems to indicate that interaction, especially actual physical interaction, with a dog could help lower your blood pressure.

You spend one third of your life sleeping, so also spending that third touching your pet could go a long way towards keeping your blood pressure down. This could exponentially decrease your risk of getting a heart disease. 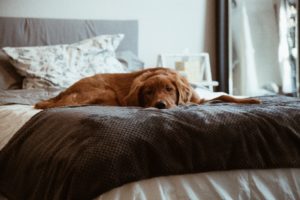 As mentioned above, having a pet, especially a dog, in your bed creates a sense of security. Dogs are very vigilant creatures and their protection instinct is strong. Dogs are fiercely loyal and protective, especially towards their owners and people they have a strong bond with. Many people have found that they sleep a lot more easily, knowing that their pet is watching over them.

In South Africa, a survey has found that house robbers are more cautious to rob houses in which the dogs sleep inside. A Rottweiler prowling the grounds at night isn’t that much of a hindrance to robbers, as it can potentially be poisoned or drugged easily. Dogs sleeping inside the house are much harder to get at, however. Small dogs that make a lot of noise act as an organic, very protective burglar alarm. 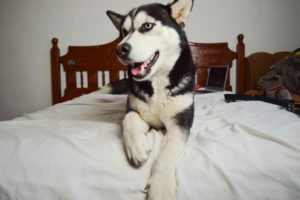 You are the centre of your dog’s world, the things its whole life revolve around. Naturally, sleeping next to the things it loves best in the whole world will make your dog happy. Dogs are also pack animals, and they look up to a pack leader to give them support and safety. Sleeping with your dog makes them feel like one of your pack. This is especially true of adopted dogs, or dogs that have been abused. In a pack situation, the pack leader will only sleep next to the dogs they trust and love; so inviting your dog onto the bed with you can go a long way towards earning their trust. A young puppy that has been separated from its mother can also benefit a lot from being close to their owner.

Dogs are also naturally sociable creatures. This is maybe the reason why humans and dogs have been getting along so well over the centuries, because we as humans are also sociable creatures who need companionship. Sleeping with your dog provides great company, and can strengthen the bond between you and your pet.

However, here are also some reasons why you shouldn’t sleep with your dog or even allow it in your bedroom. 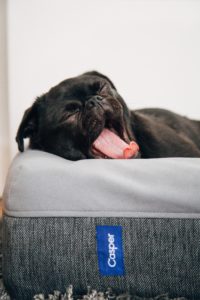 If you suffer from allergies, asthma, hay fever or any kind of condition that causes a breathing difficulty, you should be careful of letting your dog sleep in your bedroom.

Derek Damin of Kentuckiana Allergy, Asthma & Immunology in Louisiana in the United States                has warned that people suffering from allergies should not let their dog onto their bed, or even into their bedroom. Mr Damin recommends installing a HEPA (high efficiency particulate air) filter inside your bedroom to keep the air clear. If you are adamant to keep your dog inside your bedroom, even when you find out that it might be triggering your allergies, Damin suggests allergy shots. This can help build up a resistance to the pet dander that causes your allergic reaction.

If you suffer from hay fever, you will find that your dog picks up grass pollen from its excursions outside during the day. This sticks to clothes and linen. Being exposed to this allergen for a prolonged time during the night, can give you severe hay fever symptoms. 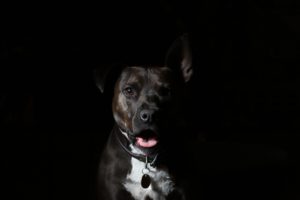 Most well-trained dogs don’t develop behavioural problems when sleeping on your bed, but some pets may turn aggressive. Due to their natural protective instinct, dogs often develop a guarding habit. When a dog selects a certain piece of furniture, like a couch, bed or chair, and growls or snaps at you when you try to move it from that spot, it is what is described as “guarding behaviour” by animal experts. This is a dangerous habit that can lead to severe relationship problems between you and your dog. Essentially, your dog is telling you that they are the boss, and growling or snapping at you like he would at a subordinate.

If your dog has a problem with guarding behaviour, it is best not to let it get onto your bed. However, your dog might only develop this habit after you’ve allowed it to sleep with you. Then you need to train it to get off the bed on command. A good way would be command it to get off the bed, and then to give it lots or praise and treats once it does this. You will need to keep on doing this, and not allow it to get back into the bed, even in the middle of the night. 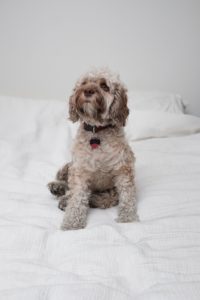 As mentioned above, dogs are naturally fidgety sleepers. Having one in your bed might make it impossible for you to get a good night’s rest. They move around a lot, they scratch, or they might need to go out for a wee in the middle of the night. Dogs are also prone to dreaming, which often has them twitching and barking in their sleep. Dogs usually sleep in 30 minute bursts, and then spend time scratching, walking around and treading down the covers to find a comfortable place again. While this is normal canine behaviour, it can be a little disturbing if you are trying to get some sleep. 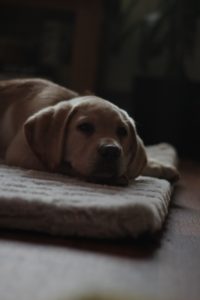 Another downside of sleeping with your dog, is the dirt they bring into your bed. Unless you bath your dog every night before bed, they will most certainly track some amount of bacteria unto your linen.

During the day, your dog will step on pavements, grass, mud and lots of other places. Not to mention, that dogs will often roll and lie down in the most disgusting things possible. It is no great wonder, therefore, that they bring a lot of bacterial diversity into your home.

Some of these bacteria might prove an actual hazard to your health.

Bubonic plague – Bubonic plague is contracted by humans from fleas. In 2008, a study done on plague survivors found that 44% of them slept with their dog, while only 10% of matched comparison subjects did the same. This risk of remained significant, even after the study took into account a variety of other factors. Dogs, unlike cats, can carry plague fleas without showing symptoms of the disease themselves.

MRSA – MRSA is a multi-drug resistant form of strep that is rapidly becoming a wide-spread problem. Humans can carry the bug in their noses, but so can dogs. When a couple in the US kept contracting MRSA, doctors found that the disease was actually carried by the dogs sleeping in their bed.

Parasites – Hookworms and roundworms are often carried by dogs, especially by those who aren’t given a deworming treatment regularly. Protozoan parasites and their eggs can also often be found on your dog’s fur.

Other bacterial infections – Since a dog is a carnivorous animal, its mouth isn’t the most sterile thing in the world. Especially people with low immune systems stand a greater chance of getting a infection if they sleep in close proximity to their dogs.

Let us know in the comments whether you allow your pet on your bed or not!